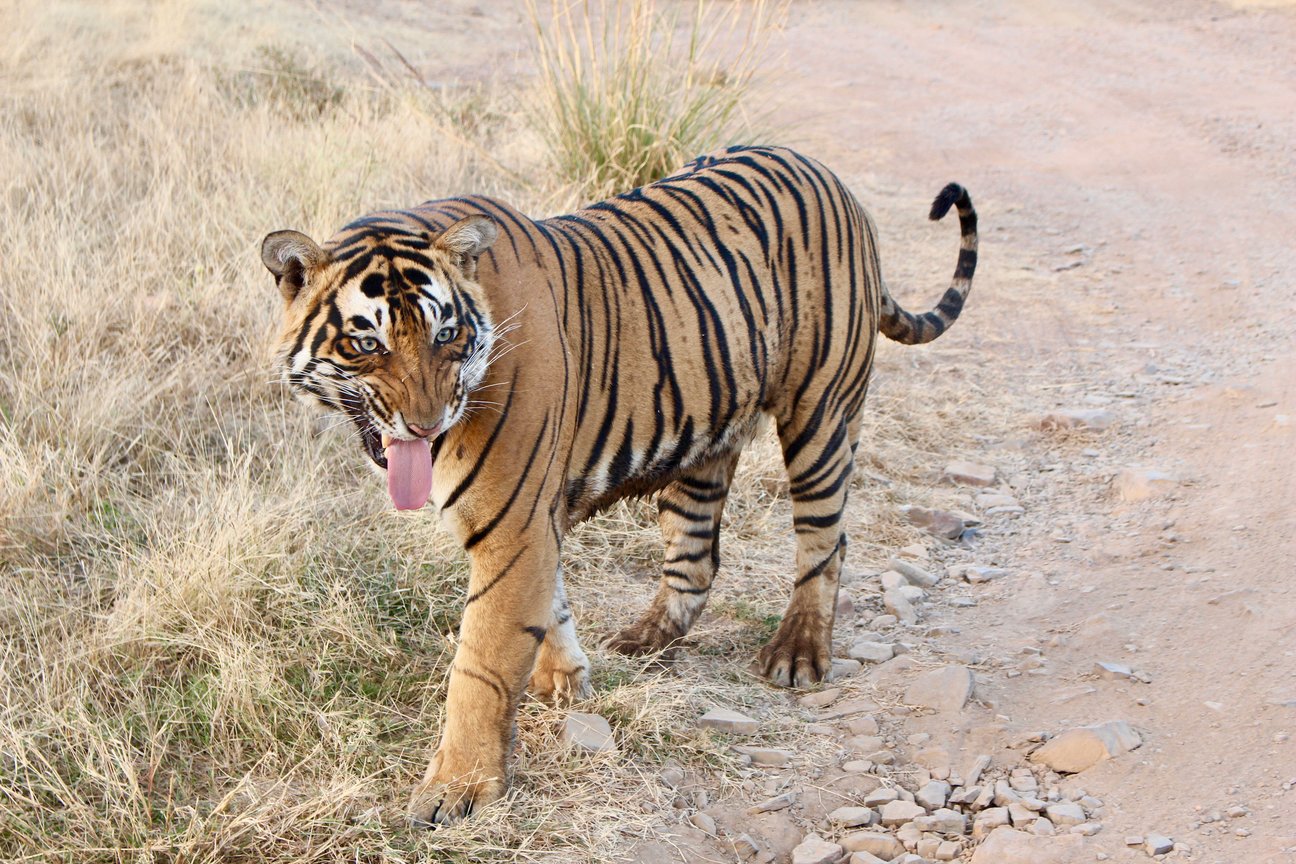 I’ve met Cinderella at Disney World’s Magic Kingdom, sang the Circle of Life with Simba in the Serengeti, and scuba’d in Nemo’s Great Barrier Reef. But I have never felt so engrained in a Disney movie as I did on Tiger Safari in Ranthambhore National park in Northern India.

Entering Ranthambhore through old stone archways, you get an odd feeling, like you’re entering an ancient abandoned kingdom left for Sher Khan to rule. Scattered around you are 10th century forts now used to provide shade for its 4-legged inhabitants instead of safety for its 2-legged ones, and the colorful, out-of-use hunting lodges from the 1700s you pass would be the perfect Airbnb for King Louie. Needless to say Baloo the sloth bear was just as loveable in person, and nicely unaffected by his fame. We even saw Ricky Ticky Tabby the mongoose who was too busy eating a frog to realize he was in the wrong movie all together. Passing by the waterfall roots of banyan trees and glistening lakes, you feel like this place has maintained some of its Disney Jungle Book magic that’s often hard to find. 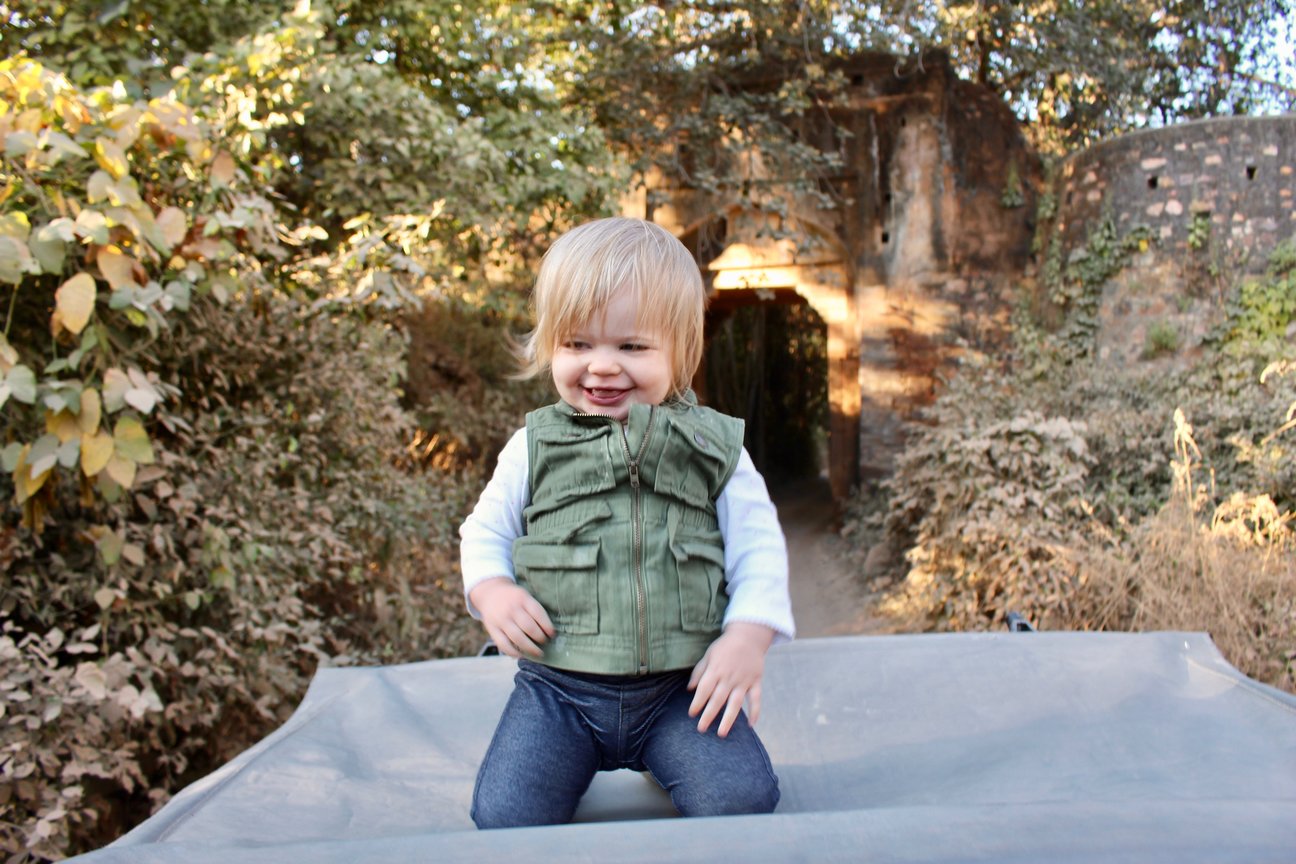 Keeping with the Indian driving spirit, I’m convinced the safari drivers are ex-race car enthusiasts but were deemed too radical for the roads, and were instead relegated to the forest. The drives were not for the faint of heart, to say the least. Pedal to the floor, fast turns, rocky paths…let’s just say this is not exactly South Africa’s highly manicured and ruled Kruger National Park drives. We definitely had baby imprints on our chest from how tightly we were holding her to ensure she didn’t bounce out the car!

The Indian safari experience has traces of its African cousin, but is so very different. There are far fewer animals and much more chaos and cars in India compared to what you might experience in Zimbabwe. While intimate moments are possible, they’re less likely in Ranthambhore than in Africa’s top safari destination of Botswana or in the private concessions of South Africa. 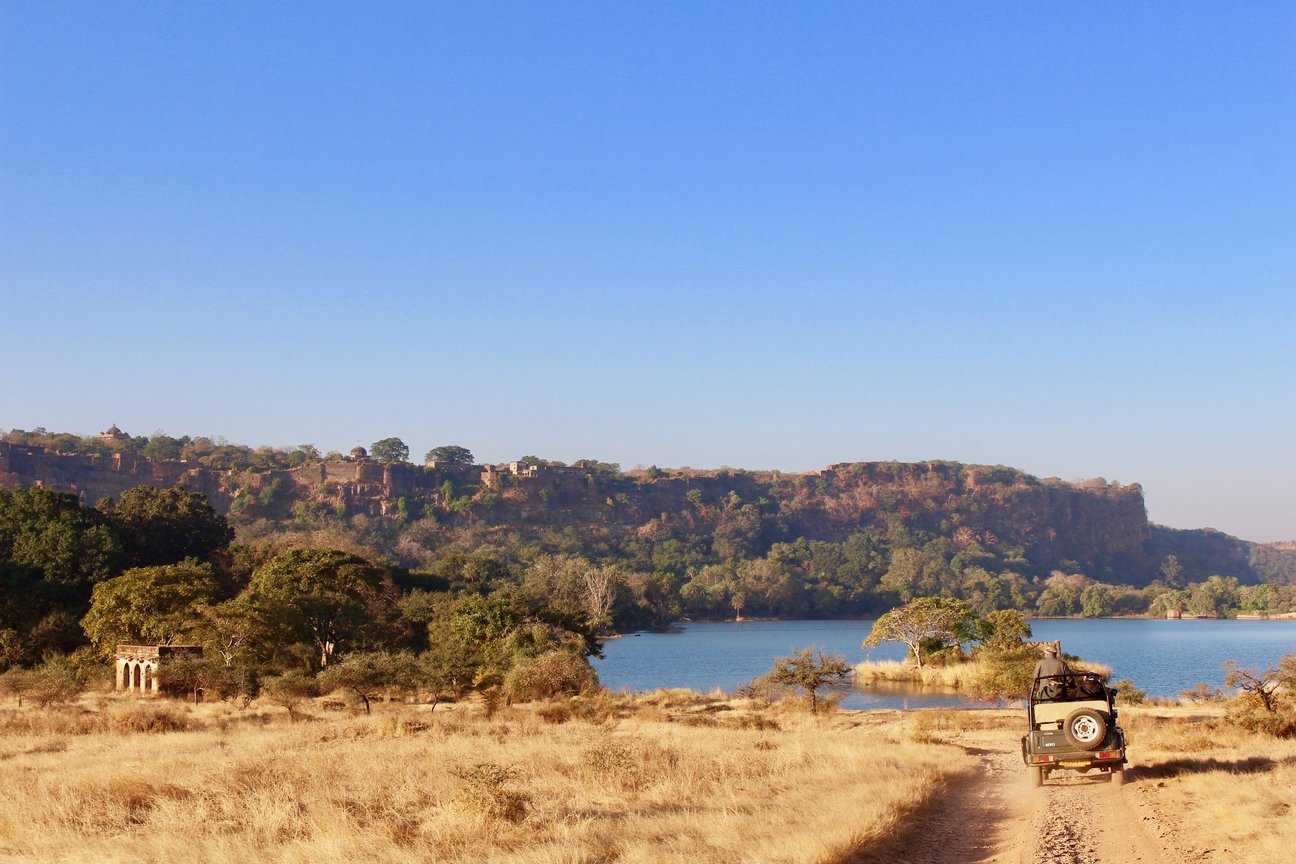 With such a flurry of activity in this colorful setting, you might be wondering how our 14 month old Mowgli did. She did surprisingly well, to much relief. I was certain we were going to be faced with a crouching tiger, crying baby situation, but we threw enough food at her that she stayed relatively quiet and left the park with as many fingers and toes as she entered with. At one point I saw the baby and the monkeys exchanging glances and I feared a poop throwing competition between them was in our future, but alas we were saved from that shit fest. She even learned to do the “oo oo aa aa” with monkey arms by the end of the trip as a way to taunt them (not advisable). The baby somehow managed to take her regular morning and afternoon naps on the drives. This is seriously shocking considering the cars movement was closer to being inside a washing machine or being strapped to a galloping horse, I guess a girl’s gotta nap when a girl’s gotta nap! Even better than not having to mess with our nap schedule, my concern about bugs and mosquitoes was a total non-issue, since we visited in November when it was as dry as an elephant graveyard and cool enough to scare them off. 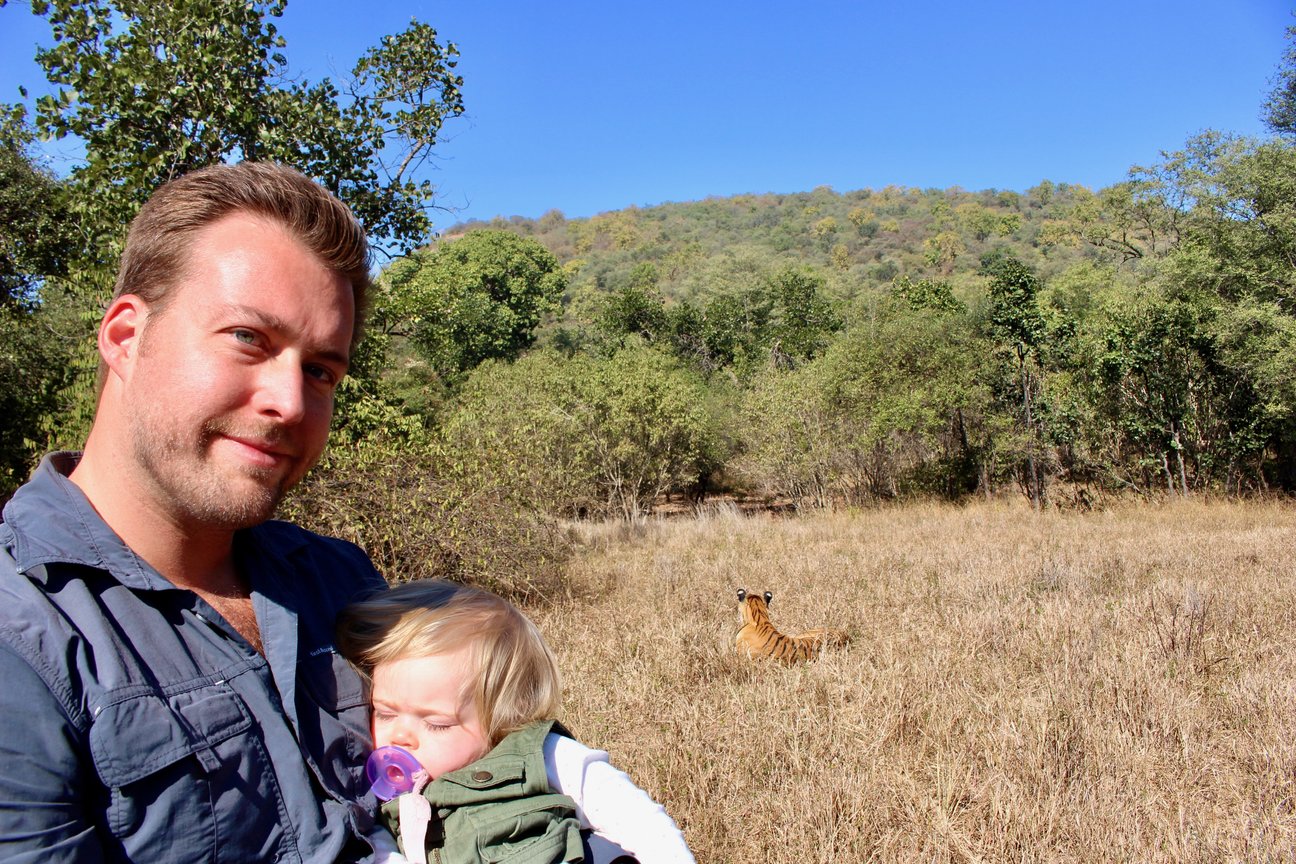 One very important tip if you’re planning on going on a tiger safari in Ranthambhore National Park: in the last year they’ve changed the game and created 2 main kinds of safari drives – the normal morning/afternoon game drive and the half day drive, which can also be done in the morning or afternoon. There’s a bigger difference between these two than originally meets the eye. Ranthambhore has a grid system that allows a certain number of cars in each section. A normal game drive confines you to just one section per drive. This means if you’re in section 1 for the morning and there’s a tiger sighting in section 3, you’re out of luck unless that tiger decides to take a long afternoon stroll into your section.

Alternatively, the half-day drives include the all-powerful forest guard with his walkie-talkie in your car. This is the key, my friends. The forest guard allows you to go through locked barriers between sections to track and see tigers all over the park, wherever they may be. It also allows you into the park hours before anyone else and to hear about the tiger trackings from the other guards on his monitor. Can you see tigers without the forest guard? Absolutely. However you need a solid amount of luck that they’re both on the move that day AND in your section. The forest guard is basically your game boy genie giving you all sorts of tricks to get to win the tiger game. 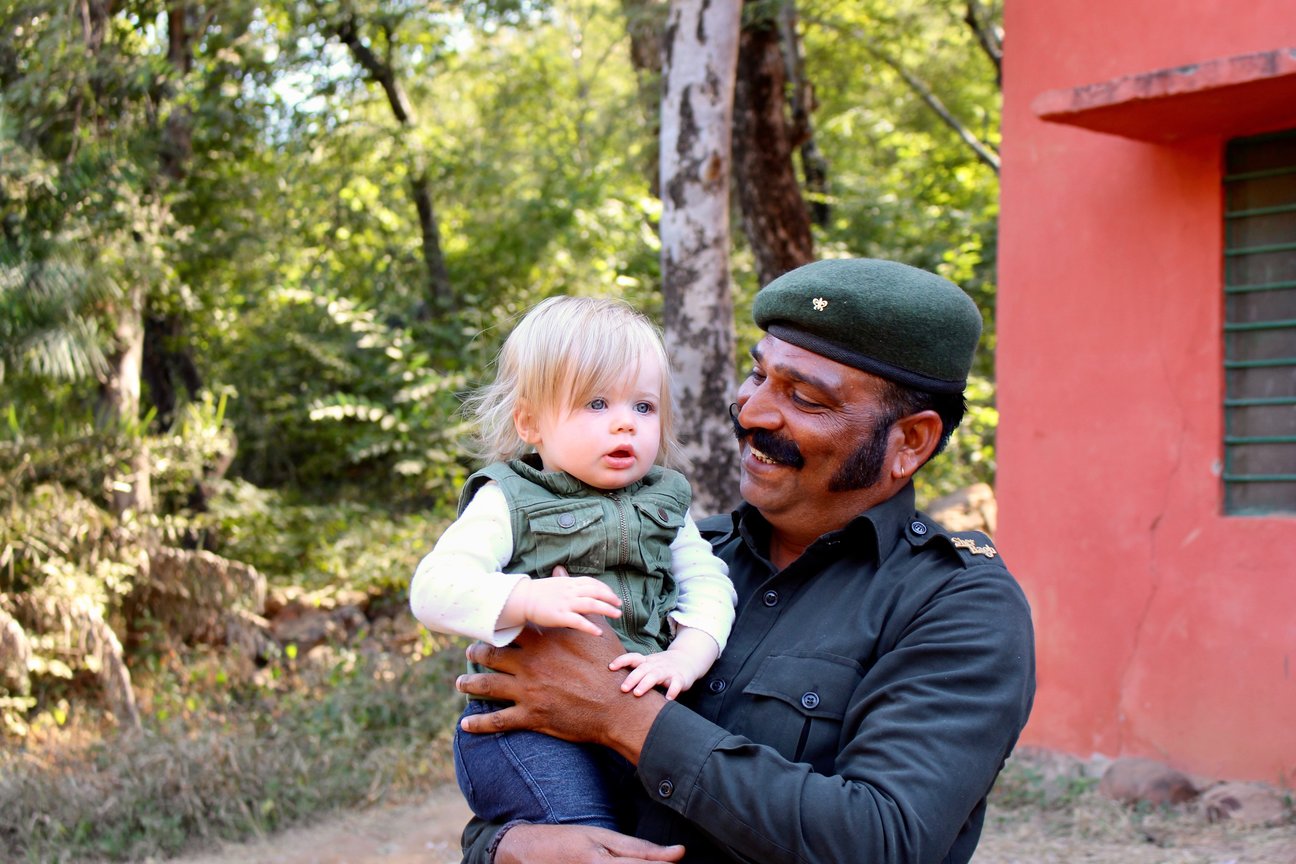 All in all I’m so glad we saw a tiger and the baby didn’t get eaten. It’s definitely a great addition to any India itinerary, however I don’t think it stands on its own as a primary destination like an African safari does. There’s no doubt it feels good to get out of the chaotic city, see some stars and sport your best loin cloth. So bring just your bear necessities to your tiger safari in Ranthambhore National park and enjoy!